FlasherZ said:
And now that we've brought in the Al Gore / Internet things, this topic wouldn't take a complete walk around the bases without a reference to the McDonald's coffee lawsuit, so I'll do it: Perhaps we wouldn't be in this situation if that lady had recognized that coffee is *gasp* a hot drink.

...then we can move on to Godwin and things will be done.
Click to expand...

The Hot Coffee Myth case is a series of falsehoods used by the RW to spin a case that is worse than what they make it out of it. This wasn't a frivolous lawsuit. The woman was seriously injured due to deliberate policy of McDonald's who knew beforehand that the coffee was hot enough to burn.

Myth: A middle-aged lady drove herself through the McDonald’s drive-through. She bought a cup of coffee, put it between her legs and drove off. While driving, the lid popped off and spilled coffee on her lap.
Fact: Stella Liebeck, the so-called “McDonald’s lady,” was 79 years old at the time of this accident. She was a passenger in her grandson’s car. She ordered a cup of coffee at the drive-through and it was served to her in a Styrofoam cup. After their order was completed, her grandson pulled the car forward out of the drive-through lane and stopped again to allow Stella to add cream and sugar to her coffee. Stella placed the coffee between her knees so she could use both hands to open the lid and add her sugar. While removing the lid the cup tipped over and poured the entire cup of 190 degree coffee all over her sweatpants, which absorbed the hot liquid and held it against her skin.
Myth: The lady got a little burn.
Fact: Stella suffered third-degree burns (the most serious kind of burns) over her lap, which included large portions of her inner thighs and other sensitive areas. She was hospitalized for 8 days and endured several very painful procedures to clean her wounds. She required skin grafts and suffered serious and permanent scarring.
Myth: She sued them for a Million Dollars!
Fact: Stella offered to settle her case for $20,000, but McDonald’s refused her offer.
Myth: She got a Million Dollars!
Fact: The jury awarded Stella $200,000 for her injuries, which the judge reduced to $160,000 because Stella was 20% at fault for her accident. The jury then also awarded $2.7 million in punitive damages against McDonald’s because they knew their coffee was dangerously hot and they served it like that anyway because it “tasted better.” The judge then reduced this award to $480,000. McDonald’s appealed and eventually the case settled for an undisclosed amount.
Myth: McDonald’s got punished for serving hot coffee. Everyone serves hot coffee!
Fact: McDonald’s didn’t just serve their coffee hot– their operations manual required that is be served between 180 and 190 degrees; 30-40 degrees hotter than other coffee-serving restaurants in the area. The Shriner’s Burn Institute in Cincinnati issued warnings that coffee served above 130 degrees was “dangerously hot.” McDonald’s knew that their coffee was “not fit for consumption” at the temperature it was served because it caused third-degree burns within 3-7 seconds of contact with the skin. In the ten years prior to this accident they had 700 complaints of burns from their coffee, including complaints of burns to children and infants from accidental spills.
Conclusion: The important thing to take away from this story is that the seven-figure number you read about in the newspaper is very frequently not the actual amount a plaintiff receives, particularly in Upstate New York. Stella Liebeck was awarded only $200,000 for her serious, third-degree burns, and then the judge reduced that award to $160,000. Even the punitive damages award, which resulted from exceptionally callous behavior on the part of McDonald’s, was reduced by the court to a number decidedly below $1 million. Courts very frequently reduce large jury awards, but the newspapers don’t report that information.
Click to expand...

On February 27, 1992, Stella Liebeck, a 79-year-old woman from Albuquerque, New Mexico, ordered a 49-cent cup of coffee from the drive-through window of a local McDonald's restaurant located at 5001 Gibson Boulevard Southeast. Liebeck was in the passenger's seat of her grandson's 1989 Ford Probe, which did not have cup holders, and her grandson Chris parked the car so that Liebeck could add cream and sugar to her coffee. Liebeck placed the coffee cup between her knees and pulled the far side of the lid toward her to remove it. In the process, she spilled the entire cup of coffee on her lap.[SUP][9][/SUP] Liebeck was wearing cotton sweatpants; they absorbed the coffee and held it against her skin, scalding her thighs, buttocks, and groin.[SUP][10][/SUP]
Liebeck was taken to the hospital, where it was determined that she had suffered third-degree burns on six percent of her skin and lesser burns over sixteen percent.[SUP][11][/SUP] She remained in the hospital for eight days while she underwent skin grafting. During this period, Liebeck lost 20 pounds (9 kg, nearly 20% of her body weight), reducing her to 83 pounds (38 kg). After the hospital stay, Liebeck was cared for 3 weeks by her daughter.[SUP][12][/SUP] Liebeck suffered permanent disfigurement after the incident and was partially disabled for up to two years afterwards.[SUP][13][/SUP][SUP][14][/SUP]

Liebeck sought to settle with McDonald's for $20,000 to cover her actual and anticipated expenses. Her past medical expenses were $10,500; her anticipated future medical expenses were approximately $2,500; and her daughter's[SUP][12][/SUP] loss of income was approximately $5,000 for a total of approximately $18,000.[SUP][15][/SUP] Instead, the company offered only $800. When McDonald's refused to raise its offer, Liebeck retained Texas attorney Reed Morgan. Morgan filed suit in New Mexico District Court accusing McDonald's of "gross negligence" for selling coffee that was "unreasonably dangerous" and "defectively manufactured". McDonald's refused Morgan's offer to settle for $90,000. Morgan offered to settle for $300,000, and a mediator suggested $225,000 just before trial, but McDonald's refused these final pre-trial attempts to settle.[SUP][2][/SUP]

The trial took place from August 8–17, 1994, before New Mexico District Court Judge Robert H. Scott.[SUP][16][/SUP] During the case, Liebeck's attorneys discovered that McDonald's required franchisees to hold coffee at 180–190 °F (82–88 °C). At 190 °F (88 °C), the coffee would cause a third-degree burn in two to seven seconds. Liebeck's attorney argued that coffee should never be served hotter than 140 °F (60 °C), and that a number of other establishments served coffee at a substantially lower temperature than McDonald's. Liebeck's lawyers presented the jury with evidence that 180 °F (82 °C) coffee like that McDonald's served may produce third-degree burns (where skin grafting is necessary) in about 12 to 15 seconds. Lowering the temperature to 160 °F (71 °C) would increase the time for the coffee to produce such a burn to 20 seconds. Liebeck's attorneys argued that these extra seconds could provide adequate time to remove the coffee from exposed skin, thereby preventing many burns. McDonald's claimed that the reason for serving such hot coffee in its drive-through windows was that those who purchased the coffee typically were commuters who wanted to drive a distance with the coffee; the high initial temperature would keep the coffee hot during the trip.[SUP][2][/SUP] However, the company's own research showed that some customers intend to consume the coffee immediately while driving.[SUP][3][/SUP]
Other documents obtained from McDonald's showed that from 1982 to 1992 the company had received more than 700 reports of people burned by McDonald's coffee to varying degrees of severity, and had settled claims arising from scalding injuries for more than $500,000.[SUP][2][/SUP] McDonald's quality control manager, Christopher Appleton, testified that this number of injuries was insufficient to cause the company to evaluate its practices. He argued that all foods hotter than 130 °F (54 °C) constituted a burn hazard, and that restaurants had more pressing dangers to warn about. The plaintiffs argued that Appleton conceded that McDonald's coffee would burn the mouth and throat if consumed when served.[SUP][17][/SUP]
A twelve-person jury reached its verdict on August 18, 1994.[SUP][16][/SUP] Applying the principles of comparative negligence, the jury found that McDonald's was 80% responsible for the incident and Liebeck was 20% at fault. Though there was a warning on the coffee cup, the jury decided that the warning was neither large enough nor sufficient. They awarded Liebeck US$200,000 in compensatory damages, which was then reduced by 20% to $160,000. In addition, they awarded her $2.7 million in punitive damages. The jurors apparently arrived at this figure from Morgan's suggestion to penalize McDonald's for one or two days' worth of coffee revenues, which were about $1.35 million per day.[SUP][2][/SUP] The judge reduced punitive damages to $480,000, three times the compensatory amount, for a total of $640,000. The decision was appealed by both McDonald's and Liebeck in December 1994, but the parties settled out of court for an undisclosed amount less than $600,000.[SUP][18][/SUP]
Click to expand... 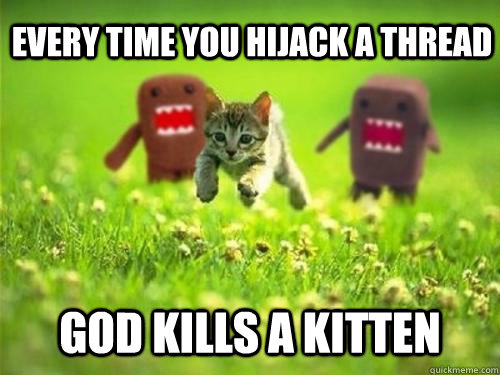 It's where this thread was heading. Now we just need someone to invoke Godwin's law (go ahead, compare conservatives) and this thread will be fully complete.
•••

only a nazi God would kill my kitten. There, y'all happy? Thread prophecy complete.
•••

S'toon said:
The Hot Coffee Myth case is a series of falsehoods used by the RW to spin a case that is worse than what they make it out of it. This wasn't a frivolous lawsuit. The woman was seriously injured due to deliberate policy of McDonald's who knew beforehand that the coffee was hot enough to burn.

And they didnt sure Ford for not having cup holders!!! LOL :crying:
•••

tomas said:
only a nazi God would kill my kitten. There, y'all happy? Thread prophecy complete.
Click to expand...

Lloyd said:
And they didnt sure Ford for not having cup holders!!! LOL :crying:
Click to expand...

Here's one prominent conservative's take on Elon Musk and by extension, Tesla: