Confessions Of A Hydrocarbon Addict 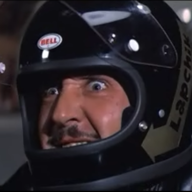 Short version:
I'm a lifelong, died-in-the-wool petrolhead who has finally found salvation through amperage. I count the days until the M3 is revealed and pre-orders start, and the wait to actually get one will surely be agonizing. In the meantime I plan to spend a lot of time here catching up on all your accumulated thoughts, wisdom and experiences, and bemoaning thefact I'm not yet a part of it.

Long version (and I do meanLONG):
I apologize in advance if this is not the appropriate spotto write a novella on who I am, why I'm now here and why everyoneelse should be too. If it's not then I kindly ask one of the moderators to move it to the right place.
But this story for me isone that's a lifetime in the making and you all are the first audience that I think will be fully appreciate it, so I beg your indulgence.

I truly cannot wait. To me, we're on the verge of a technology shift not seen in transportation since the dawn of the jet age, and the parallels are many. Much faster, way quieter, far less maintenance. Just like folks today who marvel at the patience of those who endured rattling across the oceans in DC3's, we will look back 20 or 30 years from now and think “ahhh, those people who had to be propelled to work by thumping explosions... how complicated and tiring that must have been.”
However on that subject I do have a confession.
I think there's a part of me, and many others, who have a very powerful emotional attachment to the internal combustion experience, and will be loathe to give it up in its entirety. And that can be a major inhibiting factor to true mass adoption if not handled properly. Obviously there's already huge resistance from the oil companies, witness some of them now trying to peddle hydrogen fuel cells as the “real” alternative. But I am absolutely sure that the next hurdle, once its apparent that battery electrics are going to be Big, is that many ICE enthusiasts will see them as a threat to their kind.
Here's the thing. We need to convince the ICE diehards that the absolute best thing that could happen to them is that the vast majority of Joe Public goes electric. I'm going to go out on a limb and say that something like 10% of the driving population are ICE diehards... muscle car owners, track rats,off-roaders, who will have to have the pump handle removed from their cold, dead hands. You know what? That is absolutely fine in my books. If we convert the other 90% as well as attack all other sources of GHG emissions with everything we've got, we WILL be able to things under control while still having a few million ICE vehicles running around worldwide, especially if most of them are just for pleasure use. And I'm likely going to be one of those folks. As much as I'm ridiculously stoked at what the future of battery electric driving is going to bring, I know at some point later on I'm going to need fun car for the odd track day or jaunt down memory lane. Because as much as I love crossing oceans in near silence in matter of hours, my jaw still drops in awe at the sound of a Merlin-engined P-51 Mustang. No jet at any airshow will ever come close. Props will always have a place for such occasions in the air, and so should ICE on and off the road. My goal then is to convince both enthusiasts and my industry that the best way to preserve the future of ICE for hobbyists is to make sure everyone makes the switch for everyday use to sustainable transport and energy. That to me would be a true win-win future.
Going electric for me is without a doubt going to be the highlight of my life so far as an automotive junkie. For the first time ever I'll be able to strafe the roads at will for just pennies a mile, leaving nothing in my wake but mad laughter, refilling my “tank” every night with energy from falling water. No more apologies or guilt. I CAN have it all.

Now bring on the 3 so I can get busyproving this to the rest of the world!

Wow!! That was very well written and I enjoyed every bit of it, that I read it twice.


"Greenhouse gas was something you worried about if you'd overindulged at Taco Bell prior to tending your indoor tomato crops."

Loved it; We all found a different path... the challenge is going to be finding a way to guide others without them 'digging in'. Sad to say that I've mostly failed in that goal.

I spoke to an oil field worker today... he told me about a new fracking method that can lower their costs per barrel to $30... BEVs are going to have to win on their own merit. We can't wait for peak oil, by then it will be far far too late and the damage will be done.
•••

Thank you all for the welcome and comments (not to mention the stamina to slog through that :smile.

nwdiver - As I mentioned in the post I've been amazed how positive responses I've had so far while even just talking about the concept. I'm sure once I actually have a car to drive around, write about and start reaching a larger audience I suspect I'll start getting a wider point of view, and not all of it sunshine and roses. But we all need to keep at it and find the approach the works best. The cars already stand on their own merits IMHO. If the S and the X are any indication then the 3 should be a true Weapon of Mass Conversion.
The real hurdle will be cleaning up power generation in areas that are not as fortunate as here to have so much renewable.
•••

I
New member from the Netherlands