Hi All - I've been on this forum since 2013 and had the first P+ delivered in San Diego. I've stuck with that car throughout all the tempting iterations. I've driven every single version of the MS through friends and loaner cars. We've had X's and I've driven the M3P for a long rental and we now have a MY to replace our MX.

The P+ was a real beast in its day, and through the 90+k miles I had it we took it on every conceivable adventure you can imagine (as I've written about many of them on this forum). The Plaid was too much to resist and thus had to finally upgrade. Here is the comparison. Not surprisingly, 10 years of Tesla innovations leads to a completely different experience.

Exterior Looks: To Elon-simps like me, I can spot the new S a mile away. For 90+% of the general population they will not know the difference between this and 40 kWh version of the Model S (are there any left?). For me this is a big advantage because I dont want any extra attention. Personally love the more aggressive stance and front lights and blacked out trim.

Interior: Wow, they finally figured out how to make a luxury interior. Love everything about it. I love the Yoke (I grew up on Knight Rider), I love the absence of stalks. I love the transmission swipe. I love seeing the advanced suspension settings. The kids love the rear screen. Still need to see if their bluetooth headphones will let them watch their stuff while I listen to music on the speakers. love the folding rear middle seat that turns it into executive seating. Love the cupholder arrangement in front with the elegant moving doors. Love the magnetic holders in the tailgate. Seats feel supportive and magnificent, like Elon said the 2012/early 2013 seats were basically like sitting on a piece of cardboard. The cooling seats REALLY WORK 100%. We had them on our 2016 X and they were completely useless. The climate control is powerful and works great (someone on another thread was complaining about heating but ours heats quickly like a furnace!). The interior is super quiet even at highway speed compared to the P+ and I dont even have noise cancellation yet. Audio sounds great (but I'm not an audiophile and even the P+ sounded great to me).

Tech upgrades: Love the inductive chargers all over the place (4 total). Love not needing a key fob anymore. Love being able to use Sentry to watch the cameras on my car or talk through the boombox. Love having autopilot (goes to 90 like our X did instead of 80 like the now radar-less Y and 3). Love all the driver assist features and FSD viewing. Love having basically double the usable range. My P+ charged 90% to about 208, plaid = 313. My average consumption on P+ was always 400+ whereas after a couple hundred miles on Plaid its 320 (flooring it often).

Handling/Feel: Feels far more planted and solid than my antique P+ which, at the time, felt as good as the BMW M3 I came from. Now the P+ feels more like a boat in comparison to the Plaid. The MY feels more fun to drive than the P+ but the handling of the Plaid just feels like another level. Very little body roll, adaptive suspension is just incredible. Really feels like you are driving on rails. Also, it feels really well put together. Unlike basically every other iteration of dual motor S and X's, this one has no unusual sounds, no flutter, no vibrations (not yet atleast), no crazy sounds from the front end on full acceleration (every single X and S I have driven with dual motor has the dreaded shudder).

Performance: What can I say that has not been said before? Flooring it at 80 feels like flooring it at 0. It is like a time machine fast and if you are a passenger your head will be glued to the headrest and you wont be able to remove it. Obviously the P+ is like a rickshaw compared to this thing but more importantly, at freeway speeds when you need to quickly pass or do something, the P+ had very little torque left whereas the Plaid doesnt care what speed you are going, it always feels the same.

What I miss from P+: SUNROOF SUNROOF SUNROOF. If they ever release one I suppose I'll have to sell this and get another. I also miss the third row for kids. Finally, I miss the cavernous FRUNK that I can store a comical amount of stuff in.

I was worried that I would have some sort of defect on delivery but I have gone through the checklist and pretty much inspected every pixel of the car inside and out. It is flawless (which is a first for me - even our Y was misaligned at delivery. Every single Tesla we have had needed to go back to service for something). I was worried that I was still too early here but it looks like they figured out how to build these. My P+ had been serviced prob 100 times and has been completely rebuilt over the years. In fact its in service again now!

Bottom line is that if you are a rare duck like me and have an early MS (I didnt even have parking sensors or folding mirrors) then this upgrade is worth it despite losing your sunroof. 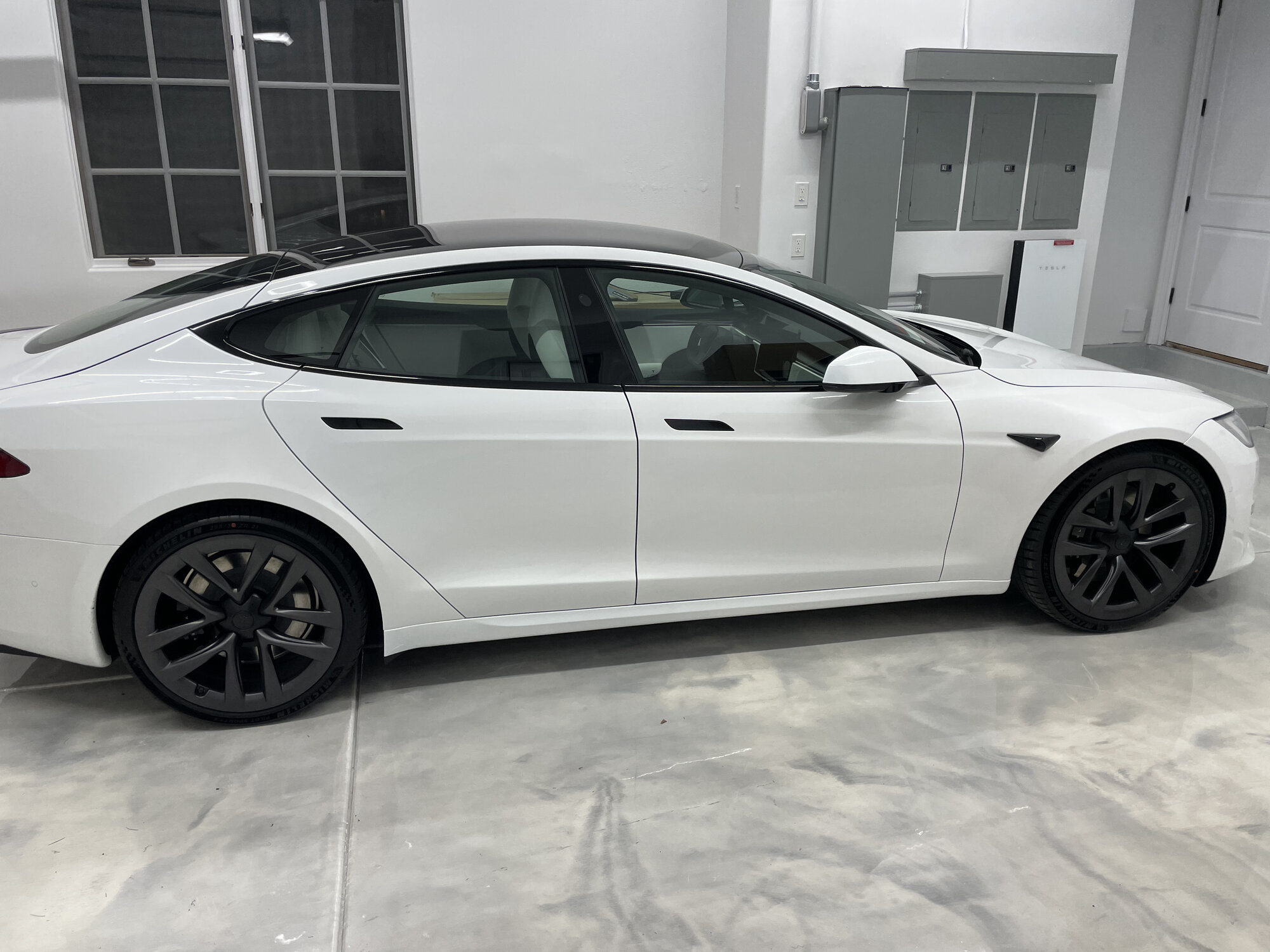 Ordered my Plaid Dec 1 and picked it up Dec 23.. Came from a 2014 P85D which I though was fast but this thing makes it look weak especially above 80 mph. I am getting use to the yoke and like it now but still hit buttons accidentally when maneuvering, great on open road. I was not impressed with fit and finish, gaps are not even, charge door doesn't close flush. Other things older car had and are missing, there is no energy meter, no odometer on dash screen. Energy monitor is a joke, can't see it and has no reference numbers. AP no longer changes lanes, this was a big lose that you can get back for $12k. No AM radio. And with just 2000 miles I am seeing a lot of chips on rear wheel flairs above the protection film. The older car seems to go closer to the rated miles. Old with 230 showing, go about 190. New 390 showing =255miles same conditions.

I hope this doesn't sound like I don't like the car, I do. Just when you upgrade I like to think I am getting more not less for the money. A big plus for the new is charge time. Both cars side by side at charger the new charged from 30 to 396 (full) in the time the old car charged from 125 to 230 and still had 15 minutes to go.
Reactions: KOL2000 and tm1v2
•••