wjgjr said:
It would be nice if there was an option to alert you through email, text, or the app if there was an issue with the equipment connecting back to Tesla for a certain (ideally configurable) amount of time so that you could have potentially been notified of the issue last night rather than requiring a human to notice it this morning. Had you been on vacation or if the equipment happened to be installed in an out-of-the-way location, you might not have been aware there was an issue if you were not somebody who checks the app regularly. For my setup (with the TEG hard-wired) I would expect essentially no outages, unless my internet was out (and even then, when it actually was, the failover to cellular worked flawlessly) so I would appreciate an alert on the order of 15-30 minutes if the TEG wasn't communicating back to Tesla (or was communicating a problem.)
Click to expand...

I asked my project advisor if the app gives any notifications on your mobile device of problems with your system. He said Tesla monitors all systems and is alerted if something is wrong. Apparently not true from the OPs experience.

Does anyone have any suggestions how to keep apprised if something is amiss, or not working properly?
I expect I will not be checking my app everyday as I have been since I only recently got my activation and it has captivated my attention as a new learning experience. But I am now getting away from checking several times a day.
My PWs are outside and I am certain I would not have seen any green flashing light or heard a chiming noise as your wife fortunately did.
G

There isn't any other out-of-the-box monitoring that I'm aware of but if you connect your PW to your local network (wifi or ethernet) you can:

I haven't found the Tesla app alerts to be all that reliable so I opted to do #3 - if the Powerwall stops responding to my HA system I get an email.
Reactions: LadyLion
B

Interesting solution. Which system do you use?

BGbreeder said:
Interesting solution. Which system do you use?

I use HomeSeer 4 with a Powerwall plugin I wrote! 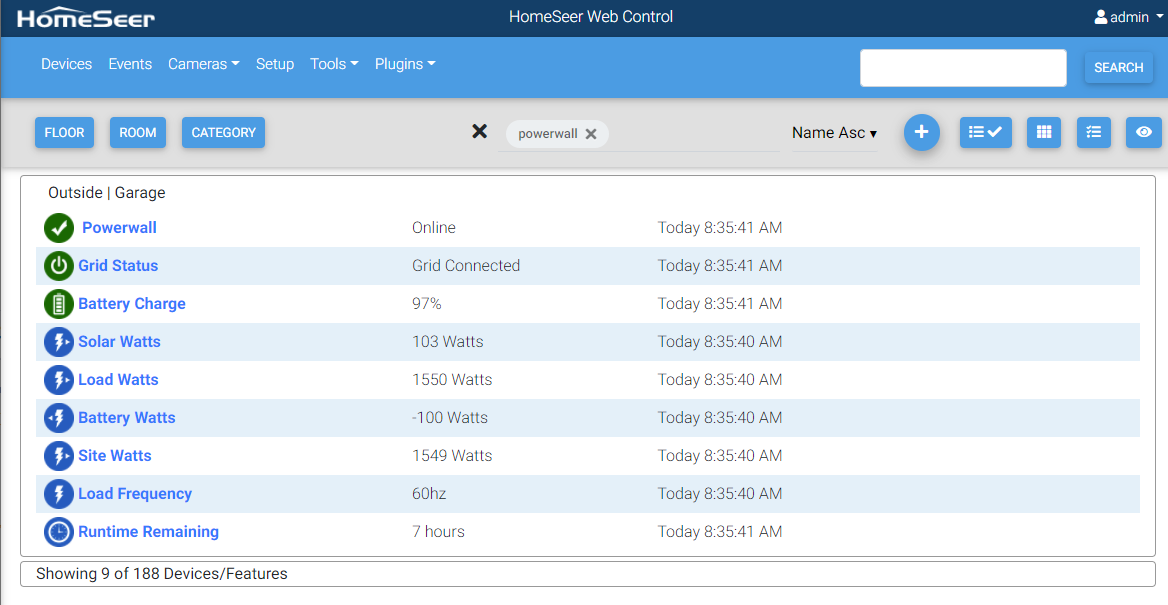 I have a few other events that do things like turn off lights if I'm away and play a chime in the master bedroom if the outage lasts longer than 5 minutes, which is loud enough to wake me up at night (the Tesla app notification doesn't).
Reactions: LadyLion