I’ve set up a Viofo A129 Pro Duo dashcam in my 2016 post-facelift pre-rearseat-cupholder S75D (AP1) via the always-on 12V from the microphone area using the hardware kit. Side note on this dashcam install: Turns out the time consuming part by far was routing the cable to go to the rear camera, I partially followed the TeslaTap instructions by meticulously avoiding the all-too-easy-to-obstruct passenger side curtain air bags, and although the panels mostly cooperated, I wimped out on fully yanking off the passenger side lower B pillar panel since it really didn’t wanna come out and I could even see poking a flashlight in from the side that a plastic section was starting to tear away. One of the blue clips was visible there having stuck in the frame with the panel side disconnected, so unfortunately there was no way for me to reset that one, and it’s only mildly ill-fitting now, and I’ve got the dashcam wire way down under there running with the rest of the cables. I should have probably just run it on the outside, but oh well. That instruction video (very helpful) made it look too easy… though I’m quite glad to know the curtain airbags are not affected by what I’ve done.

I’ve worked out that the green-white stripe wire in the rear view assembly (2nd one down from the top) has 12V which I am led to believe is usable as switched 12V which I intend to connect to the hardware kit box to allow it to control parking mode for the dashcam. Meanwhile while I’m planning out connecting this, I’ve tied this ACC wire to the 12V wire on the hardware kit for now, which means no parking mode/always on, and the dashcam is using motion triggered recording at this point. Although this is probably good enough, I don’t know yet if this motion detection is sensitive enough to my taste, and recording 24/7 seems… maybe overkill. At 4K res even the 256GB high endurance card i have in there would fill up in half a day based on its estimate (though I havent confirmed this, I would hope that stationary video would compress better, but who knows with a cheapish webcam), doesn’t seem like a lot of time buffer.

Anyway, my multimeter was showing something a little weird on this wire when I put it in AC mode so I got out my mini toy oscilloscope, and after some fiddling around I can see that this pin holds 13V and has digital signal drops to 0V on it with packets that arrive once a second or so when the car is on.
I sat in the car for 5 minutes after using the Turn Off button and although the cigarette port turns off, my Scan My Tesla app still showed 130W power draw; it seemed like a 12V based vampire draw, and this rearview wire holds 13.x volts steady (as already mentioned, when car is on, it has periodic signals going on it. I could make a simple RC circuit to smooth out the voltage if the signals end up interfering).

So I’m going to continue to experiment more, fully connect it up to the dash cam and then I’ll be able to work out when and in what kind of pattern the car actually shuts off that rearview’s voltage, if at all, by viewing the parking mode behavior off the dashcam, I could do some data logging with SMT and other CAN bus tools, but anyway the tl;dr of my question is that:

I want to know where the setting for the power saving mode for the car is located. I think this used to be a thing… Actually, OK I think I found my answer, the MCU2 upgrade removes this option because the completely different MCU system no longer has an explicit power saving mode. Does this mean there is nothing I could do to encourage it to power down? I just want to be prepared with steps to take if I ever need to park the car for an extended period of time away from a charging port.

At this point it’s safe to say that the least amount of effort to get to the bottom of my rearview tap experiment is to simply complete wiring up this dashcam to the wire I’ve already tapped, hopefully this rearview assembly wire can cut off when the car is in my garage trickle charging, although I’ve already come to terms with the fact that it probably will not, and that it may also be always-on 12V. I suppose I can also run another switched wire up there around the same route near front passenger footwell from the cigarette port (maybe some kind of small cigarette port extension with a tap… maybe I take apart center console… getting tired of messing around in there, if I’m taking that thing apart I’d rather do it as part of wiring up a 120VAC inverter house port!)

Meanwhile I guess I can also do a simple test which is hook my mini o-scope up to a battery bank to keep it alive indefinitely and monitor it from outside the car while leaving it idle unplugged for a long time and come back later to check on it to see if the voltage cuts off. I did actually do such a test, with just my multimeter, though, and pre-MCU2 upgrade, and this seemed to work!!! That’s a significant data point, but MCU2 kind of changes the playing field i think.

Curious if anyone has comments. In particular if anyone knows about the electrical setup for the rearview assembly.
Last edited: Aug 8, 2021
•••

The right side A pillar has a factory wiring channel in it that allows you to run a wire from the windshield down to the right passenger side kick panel fuse box. Just remove the plastic cover from the right A pillar trim that has Air Bag writing on it, and take off the bolt (screw?). You can then remove the cover enough to run the wire down the A pillar with the other factory wires. I used an Add-A-Circuit Bussmann fused tap to the blue 15 A fuse on the left column of the fuse box that is about the 4th one down. Easy to spot, and easy installation. It turns on and off when you open or close the door. I doubt you will have these issues. 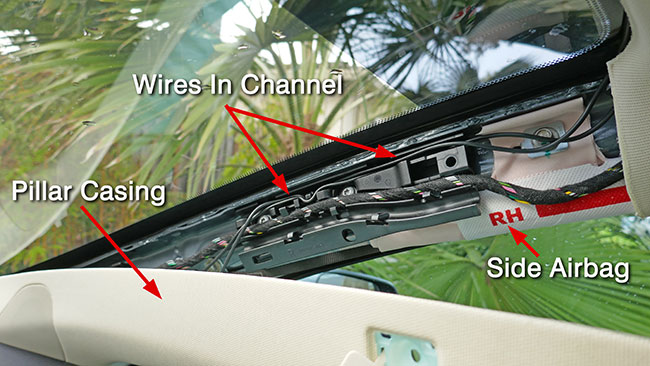 OMG I’m an idiot for not considering the cornucopia of connectivity options at passenger footwell, which is far easier (it’s along the way…) to run to the dashcam area than the center console! Thanks for that reminder

DerbyDave said:
I used an Add-A-Circuit Bussmann fused tap to the blue 15 A fuse on the left column of the fuse box that is about the 4th one down.
Click to expand...

To clarify for posterity they are F202 and F207 listed here: Tesla Model S (2015-2017) Fuse Diagram • FuseCheck.com Both are blue 15A fuses so it indeed does not seem to matter which one to tap. The 3rd and 8th from the top on the left side tall column of them.

I’ve got these posi-taps that i have ready to use but the fuse tap is very compelling so I will grab one at the hardware store to get this done instead of poking another unnecessary hole in a wire.
Last edited: Aug 8, 2021
•••

I found my fuse not exactly in the position of this chart, but I agree that either 15 A fuse on the left column should be fine. I think my fuse box had some missing (unused) fuses location on the left, and as I recall it was the 4th existing fuse down, so it was likely F207 that I used.
•••
D

DerbyDave said:
I found my fuse not exactly in the position of this chart, but I agree that either 15 A fuse on the left column should be fine. I think my fuse box had some missing (unused) fuse location on the left, and as I recall it was the 4th existing fuse down, so it was likely F207 that I used.
Click to expand...

I see. Pretty much all fuses are populated on mine!

The SC replaced the blown cigarette port fuse for me for free. Maybe there are some spares stashed in here. I’m slightly worried that this passenger panel will become loose from all the repeated opening up and closing I’ve been doing lately…
•••