Thanks in advance to whomever takes the time to read and reply. And to preface - I did review similar threads and could not find consensus / an answer to my specific scenario.

We are purchasing a M3P and MY. We have a newly built home with 200A service and panel with generous room for additions. Several major appliances use gas. We were looking to install two gen 3 wall connectors, and while we don’t drive enough daily to necessitate full 48A going to each vehicle simultaneously (and frankly would rather power share), if possible, I’d like to know we could have that capability. There is existing 1 and 1/4 in. PVC conduit going to the garage (30’ away) carrying some small gauge wires for lighting, the garage door opener, and a few standard outlets. The service to the house is underground. There is not a subpanel in the garage.

I have consulted with several local electricians and have received quite different recommendations. One electrician said he strictly would not put in two HPWCs and only would put in one, saying it’s too much continuous power draw. I have been told that the existing conduit is insufficient to be utilized for running the needed wires (presumably eight #6 Cu wires. Code seems to imply that 11 #6 wires may fill 1.25 inch PVC?). 4 of 7 electricians indicated a new area would need to be trenched out, 3 said existing conduit would work. Then 3 of 7 electricians said I would ”need” a sub-panel, other 4 said no sub-panel. One electrician said I would “need” to increase from 200A service.

As one may glean, I was surprised to get such a variance of answers and recommendations. Could anyone lend insight, and/or how they may have had theirs done?
•••
R

The Tesla Wall Connectors each require three heavy-gauge conductors (two hots and a ground; neutral is not used). So you're looking at six conductors for your two TWC's.

That several of your electricians said you need a sub-panel, while one said you would need to increase your 200A main service, suggests that your main breaker panel is nearly full. Each TWC, on its own circuit, would require a double-pole 240v breaker.

The benefit of a sub-panel, beyond convenience, is potentially less voltage drop to each TWC (assuming the feed between the main and sub-panels is 4AWG or 2AWG... something heavier than the 6AWG you'd typically run to each TWC) and making more breaker slot positions available.

Running 6AWG through conduit can be a difficult proposition. 4AWG is even worse. It's possible that your particular conduit run is challenging enough that one electrician might successfully get the necessary wire installed, while another (less experienced at difficult conduit work) would fail. That you already have existing wiring in your conduit significantly complicates the job.

I installed my TWC myself, but most folks aren't going to want to do that.

The tesla wall connectors definitely do NOT require three heavy conductors each. At the absolute max, you'd need two #6 and one #10 per wall connector. You might even be able to share that #10 ground line, I'm not sure of the rules.

You almost definitely do NOT need to increase from 200A service. Ask the guy to see the load calculation that shows you do. Its certainly possible you are already at 150A of that 200A service used, but its pretty rare. I'm guessing the guy was designing for another two 48A HPWC's running at the same time.

It would certainly be easier, and probably much cleaner, to put a 100A subpanel out in the garage. That's four decently-large conductors through the conduit instead of the large mass of wires you'll have instead. You already have all the loads coming out the far end at the same place, so putting a subpanel there should be trivial. It also might be less costly to run 3 heavy conductors and a ground than to have four slightly less heavy conductors and a ground.

Another entirely viable option is a subpanel in the garage specifically for the HPWC's, which would be two #6's and one #10(or maybe #8) ground wire. It would have to be marked '240v only' since it would have no neutral(or you could put the neutral in, but that's another wire that wouldn't be used).

A final option, one that electricians might not want to deal with, is to just hang two HPWC's of the same breaker(in the main panel). That was allowed with the Gen2 HPWCs, and is no longer an official option with Gen3. This may only be to CYA for Tesla, since the new HPWCs allow different max currents each.

There's definitely no trenching needed. A new subpanel would be a FAR better option, and even that is questionable.

It would be interesting to hear what exact other conductors are in that conduit right now. Using Conduit Fill Calculator | Southwire, I get a fill percentage of 23 percent for 4x#6, 2x#10, and 9x#12 wires, which should be plenty for your purposes. That's two HPWC's and three individual 120V circuits, and TBH you could(and may already be) sharing neutrals and grounds for some of those 120V loads. Two 120V circuits may be serviced by as few as four conductors, since you really only need a second hot for the other 120V phase. Additionally, you should be able to get up to NINE #6 wires through that conduit(with the aforementioned other wires) before exceeding the limit of the conduit. Its safe to say you don't need any conduit even if you don't have any subpanel in the garage.
Last edited: May 12, 2022
Reactions: jjrandorin, davewill and Rocky_H
••• 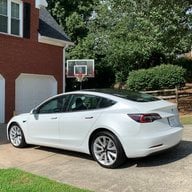 We just took delivery of a Y for my wife, and we have two wall connectors that load share.

We’ve had a Model 3 since 2019, and charging at 24A has been sufficient with an average use of 60-80miles daily, therefore we opted for load sharing in lieu of dedicated circuits for each.

Is there a supercharger close to you by chance? We’re fortunate to have one 5mins from our home, so we have that luxury in a pinch.
Reactions: jjrandorin
•••

I'd be tempted to do the subpanel. Especially if you could move those smaller circuits in the garage to it as well. This is both for the convenience of having the garage breakers easily accessible in the garage and the simplicity of having only one set of wires in the conduit. I, too, doubt that your 200a service is a limiting factor, but if it is, that configuration would lend itself to either doing load sharing, or using smaller circuits (40a instead of 60a, for instance) for charging. One suggestion I would ignore is the one that has you put in only one EVSE. Better to have two lower power ones than to move a plug back and forth between two cars in my book.

There are a lot of reasons why you get different recommendations from different electricians. Sometimes, they are simply mistaken. Other times an electrician will have run into an inspector that gave them grief over a particular item, so they avoid it. Or the one guy may think that pulling wires through the existing conduit is too hard so says he can't. Of course, sometimes they just want to quote a more expensive job. Finally, you may have worded your request slightly differently each time, or they may have heard you differently. All you can do is get different quotes, ask questions, do your homework, and make the best decision for you.
Last edited: May 12, 2022
Reactions: jjrandorin and Rocky_H
•••
R

@Atezo Wow, I am sorry you're getting such difficult and bad answers from the electricians, but there is part of this that is because they are answering kind of a badly worded question/request from you to start with.

When you say you want two wall connectors, you are definitely getting bids for running two completely separate maximum power additional 60A circuits. That's 120A of new capacity to be added!! That's why you're getting bad advice about new trenching and upgrading your main service. You definitely don't need that.

There are two factors that make that inapplicable that you definitely need to spell out to electricians when asking for bids:
1. The wall connectors DO NOT have to use a 60A circuit. They are variable setting devices that can use smaller circuits, down to as low as 15A.
2. They can power share from one main circuit that gets branched.

Subpanel? Yes, probably a good idea, simply because you have one pipe to the garage and several circuits to split out from that, so it's more clean and convenient.

So you turn the question around a little bit:
"How big of a capacity circuit can I fit within my main service to run to the garage subpanel?"

Then, you can allocate from that to the smaller circuits for the lighting and outlets, and whatever is left can be shared (with separate breakers though) between your wall connectors.

I don't know if the sharing has been explained yet. If you have let's say 40A left in the subpanel, you can use that 40A to run both wall connectors, and you put a 40A breaker on each one. You configure them to set that they are sharing a 40A circuit total, so they will not go above that, regardless if one or both is running.
Reactions: Acps110, jjrandorin and davewill
•••

E
Mini-saga of finding an electrician