This is yet another post about door handles, early models that probably is I have however not found my problem being discussed before. I have a 2012 model S where a while back my right rear door handle stoped presenting itself. No grinding or running motor noises from it so I let it be as it was down on my priority list at the moment. Now the second rear door handle is not presenting, and again with the silent treatment.

Today I disassembled the left door handle and brought it to my work bench for investigation. Everything seems to be in order and I brought special attention to the micro switch connected directly to the controller as it should tell that the handle is fully closed. The switch works. I then checked the cog gear which is fine and I tested the motor by running it directly of a battery. It works fine presenting and retracting the handle as it should. So my issue as I see it is the control unit not telling the motor to start running. As this is fully sealed up and running CAN bus of some sort I think my troubleshooting is at its end.

I also played with the three micro switches with the handle plugged in to the car with no reaction. On of them should for instance open the door lock.

Anybody else that has seen a similar situation?

On the four pins connecting the assembly to the car I am reading 13v between blue and black, 13v blue and red, 3v blue and green - blue being positive. I’m reading 10v between green and red, 10v between green and black - green being positive. Nothing between black and red. The meter I had available is unfortunately for higher voltages and does not read decimals. Doesn’t seem like anything is disconnected though.

The door positioning sensor behind the motor is more of a mystery to me having three wires to it (black, white and red) where I can’t tell what it should do. It does nothing when I’m moving the handle at least. Haven’t been able to read any voltage while moving the handle in case it’s depending on a switch, nor any resistance change while moving it between the pins. Both test performed with it disconnected and voltage metering towards the controller and resistance towards sensor.

I hope someone out there has any pointers. My car is out of warranty and it would be nice to figure this out as a DIY. 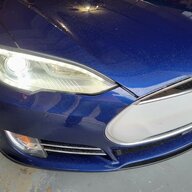 Just FYI - the Tesla V3 retrofit cost me $310 out of pocket. Tech came and did all the work included in that price.
T

Wiring harness in the door maybe? I just had one replaced on my front passenger door, the handle was fine but not getting the signal through the harness.
K

Thank you for the comments so far. I live in Norway where the rates at the garage is about 200$ an hour and no mobile service so there’s also a long wait. Just to have the car diagnosed they charge for three hours so that’s 600$ with no parts. I want to explore a few options before I go down that road

As I saw voltage between all four of the pins on the wiring harness I don’t expect it to be faulty. It still might be a problem on it though causing the CAN not to go through clean, but I would’ve expected a more intermittent fault then as there’s clearly no direct breach in the lines.