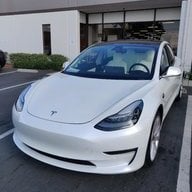 I know this is going to be old news to most of you here, but I made a road trip largely using autopilot for the first time and wanted to share my experience/thoughts and see if they're consistent with the general consensus of other AP users.

1. Drove up from San Diego to LA mostly using autopilot. Impression - it was life changing.
2. Driving from LA back down to SD. Impression - I'm....a bit more hesitant now.
During this second drive I found myself much more attentive to the road and less willing to sit back and relax. I still am amazed by the tech but the second round made me feel it was much more beta than my first drive did. I think having some features like lane changing (I didn't purchase FSD) would have been nice to make the experience a little smoother, but I'm still blown away that this car can do this out of the box. I really hope HW3 (once activated) is able to improve upon this though.

I'm very curious if some of these thoughts/hesitations are ones everyone feels when they're new to AP and if you eventually get used to how the car operates, or if there are some limitations that you generally always need to be on the lookout for?
•••

As far as satisfying the nanny state, you can just loosely hold the wheel with one hand and that weight will be just about right. There’s no need to wiggle anything. I am one of the few who feels that if you are able to keep your eyes up and keep being attentive, there’s nothing wrong with using a cheater.

I drive mine about 2500 miles a month and use AP about 80% of the time. I’m extremely comfortable with it, but it changes from update to update so that’s a continually moving target. You have to be willing to roll with it.
Reactions: SlimJim and Shadnic
•••

Just keep an eye on it. There's a groove in I-5 north of Burbank, northbound lanes, whose curve radius is wider than the radius of the lane curves. Sometimes the car will follow the groove, but I'm not about to find out if it will make me crash into the car on the right.
Reactions: Shadnic
•••