Two of the main south New Mexico tourist sites are White Sands National Monument and Carlsbad Caverns. South New Mexico is a big hole as it relates to EV charging options. I didn't see too much info on EV feasibility of these trips and and wanted to relay my experiences with doing it recently in our model X.

Short summary is, trip is doable IF you are comfortable driving beneath the speed limit and IF you have a high comfort for range anxiety.

Day 1: Abq to Carlsbad. Segment 1 was ABQ to Santa Rosa SC. Pretty easy, 140 miles or so. No issues.
Segment 2 was Santa Rosa SC to Carlsbad. This is 220 miles. I charged to 99%. EV trip planner had me arriving with anyone from 4-10% despite this. You take route 54 to route 285, which then takes you through Roswell into Carlsbad. Route 55 is backroads with speed limit of 60. I drove 5 beneath the speed limit as it initially had me arriving with 2% charge. On route 285 speed limit is around 65-70. I drove 10 beneath speed limit. I arrived in Carlsbad with 5% battery remaining, with ~320 wh/m. In Carlsbad, Carlsbad RV park has NEMA 14-50 charging plugs. I rented a spot for $35 for the night. Comfort in and La Quinta Inn are two hotels within walking distance of the RV park (I stayed at the latter).

Day 2: Carlsbad to caverns to El Paso. Overall trip is about 170 miles.
Segment 1: Carlsbad to the Caverns. Drove 5 beneath speed limit. Arrived at Caverns with 82% charge. We decided to leave our dog in the car with the AC instead of put her in a kettle there. Left AC blasting for 3 hours. Returned to find battery had drained to 70(!)%.
Segment 2: Caverns to El Paso. VERY VERY HAIRY. You take route 80 through the Guadalupe Mountains. Only charging options inbetween is to head out of the way south to Van Horn SC. Initially when we left Caverns it said we were to arrive with 0%. I usually can beat Tesla's estimate so I drove 10 beneath speed limit. (60 in a 70). There is TREMENDOUS high winds along this path. After I passed the route 54 option to go to Van Horn SC, I hit very high head winds 30-40 mph. Much of the next hour was spend with Tesla alerts saying I would not make my destination. Had to drive 50 mph (!) in a 75 mph zone in this area just to avoid percentage drops in my arrival estimate when the headwinds were this high. Thankfully roads are not heavily driven. Last hour of drive I made up some time driving 10 beneath limit and arrived with 2% battery remaining in El Paso. Certainly the AC portion of this made drive more difficult using 12% battery but headwinds are very high in this area and anyone traveling this route has to be really careful. We stayed at Home2 Suites which is near airport and has Destination charger.

Day 3: El Paso to White Sands then to ABQ.
Segment 1: El Paso to white sands. I took route 54 to get there. I was trying to make this loop and get to Truth or Consequences SC without having to charge in Las Cruces, but was ultimately unsuccessful. Drove 5-10 beneath on drive to white sands, and my initial estimate arrival of 48% increased to 58%. Used 10% driving around park.
Segment 2: White Sands to Las Cruces. Took route 70 to get back toward I-25. Again 5-10 beneath speed limit. Still didn't have enough to make it to truth or consequences SC without stopping in Las Cruces. Downtown they have a charger, charged for an hour to 40%. Its a quaint area. Had lunch there. Made it to truth or consequences SC with 3% battery driving 10 beneath speed limit (ie 65 mph in a 75 zone)
Segment 3: Truth or Consequences SC to Albuquerque. 150 miles. Pretty straight ward. Had a good tailwind, drove 5-10 above speed limit.

My overall efficiency on trip was 330 wh/m. Despite that I had more close calls (arriving with 0-5% charge) on this trip than any other, and that was despite driving 10 beneath the speed limit (sometimes more). Carlsbad to El Paso has high winds and have to plan for extra charge for that route specifically. Model S or 3, or 100D model X may have an easier time. Trip is doable but challenging. 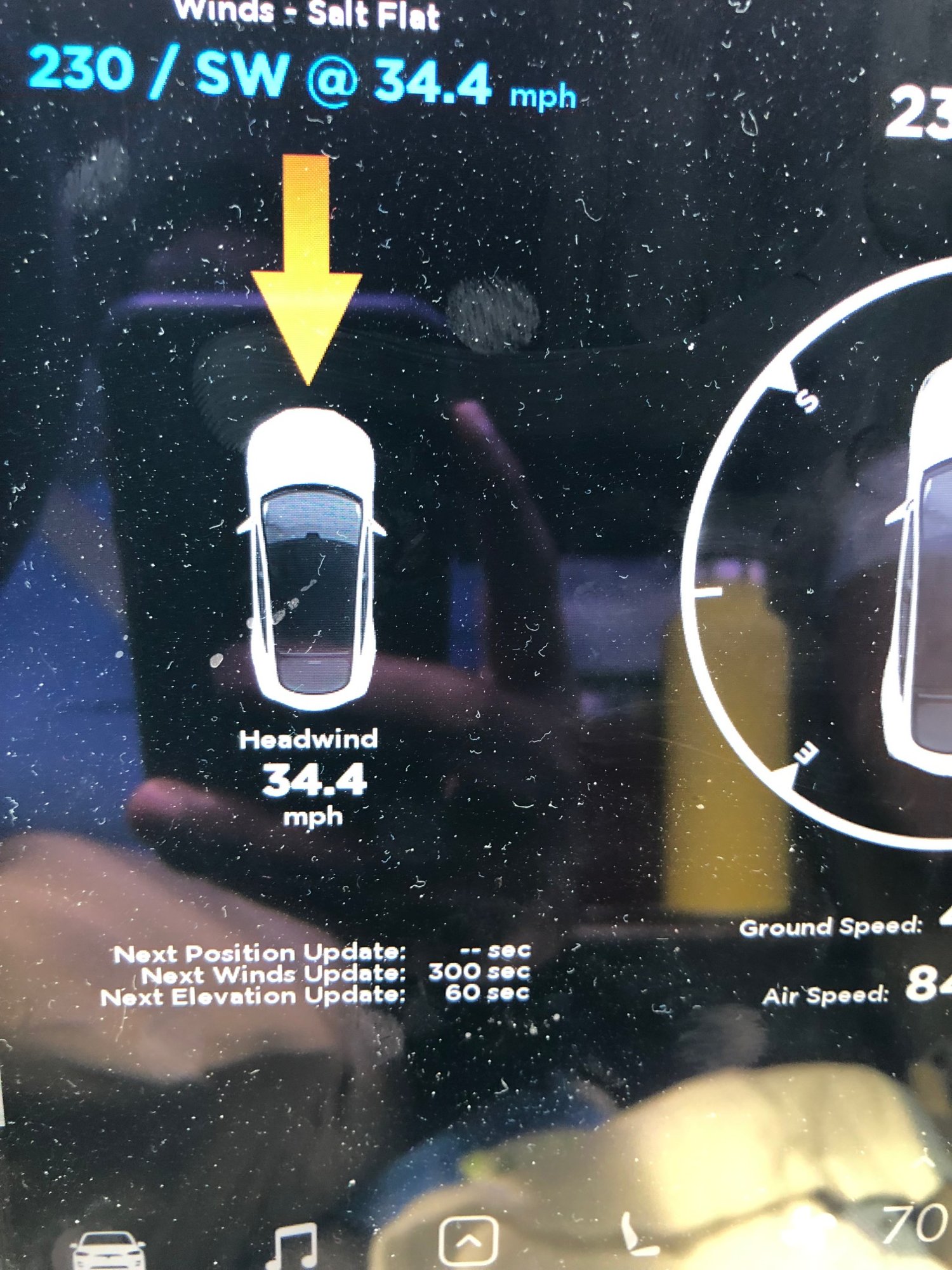 Not to be overly critical, but you definitely took some strange routes which made your travel much more difficult. Not being aware of headwinds driving east to west in the Mountain time zone was a rookie mistake. Those headwinds are the rule, not the exception. In your case they were even stronger than normal and probably would have been mentioned if you just checked a local weather forecast. In any case, when attempting a tight leg in an area with few charging options, you should check the weather anyway, especially in the Mountain time zone.

Detouring to Van Horn probably would have added about an hour and a half in drive + charge time, but you would have been able to drive as fast as you want and not experienced any range anxiety let alone a close call.

I realize you were probably trying to make this a more scenic loop but even in bad weather, you would have had no range issues had you simply driven ABQ->TorC->El Paso->Carlsbad (overnight charge at RV park)->Carlsbad Caverns->El Paso->White Sands (via Las Cruces instead of Highway 54)->TorC->ABQ.

Also, you seemed surprised that the A/C used so much battery. I actually would have expected it to be worse! In fact it would have been worse in the summer. That was a poorly planned decision assuming there was some type of other option for the dog.

Also, how are you getting that info about the headwind in your Tesla dash display? I've always thought that Tesla needs to add more info about the weather and even elevation to help aid drivers in knowing what to expect.

PLUS EV said:
Also, how are you getting that info about the headwind in your Tesla dash display? I've always thought that Tesla needs to add more info about the weather and even elevation to help aid drivers in knowing what to expect.
Click to expand...

May have been ballparking/converting based on how well his actual energy used graph was aligning with the "expected" usage?

mociaf9 said:
May have been ballparking/converting based on how well his actual energy used graph was aligning with the "expected" usage?
Click to expand...

I mean the picture he posted. It appears to be from a Tesla touchscreen.

me: Wow. Such Oblivious. So Embarrass.
G

PLUS EV said:
I mean the picture he posted. It appears to be from a Tesla touchscreen.
Click to expand...

EVTripplanner is the main resource I use for trip planning. Prior to this I wasn’t looking up wind patterns in advance per se. I use the Tesla winds app and typically adjust the drive speed if needed. This suffices in almost all situations I’ve driven.

The only real difference in the route you suggested was that I would have gone to Carlsbad initially via El Paso instead of Santa Rosa. EVTripplanner was showing me arriving via Santa Rosa with a greater margin of error than what occurred. Regardless I still would have had to go back from Carlsbad to El Paso. Likewise El Paso to white Sands via las cruces showed me arriving at white sands with 32% (on tesla navigation). This was less than the energy than what EVTripplanner eatinates via router 54 (maybe because the speed limit is less on route 54 than taking the highway to las cruces).

Unfortunately when I saw the status of the kennel, exposing my skittish dog to the trauma of the experience seemed like it would reflect worse on me as a person than my ability to decipher wind currents.

I guess it depends exactly where you were intending to drive in/near White Sands. I had initially entered "White Sands, NM" in google maps, but now I see that "White Sands National Monument" is probably a better approximation of where you were actually going. So yeah maybe no way to avoid a top off in Las Cruces on that leg.

Any time the Tesla Nav says you will arrive with <10% when you first put your route into the Nav, I prepare for some range anxiety and constantly monitor consumption as I drive. Keep in mind, that the Nav does account for elevation, but it does not account for weather in any way, so you need to monitor the weather on your own.

The good news is the Mountain Time Zone is the hardest area to navigate in an EV. You have low population density (and therefore few charging options), high winds and massive elevation changes. It will be nice some day in the future when the elevation and weather information are integrated into the Nav. Of course by then, there will be many more charging options as well.
B

Carlsbad is on my list of places to visit. I was hoping Tesla would build a Supercharger in Roswell to close the gap, but nothing on the radar I'm aware of.

I'm not one to drive hours out of my way for charging, so may take an ICE, if they don't fill in the hole within a couple of years.

Is anyone else getting their Tesla delivered to their door?

No way to get to Carlsbad Caverns?