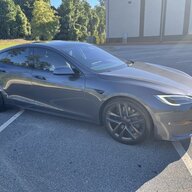 Guess it makes sense to get the items controlled by ultrasonic out. That should be largely similar. I'd still like to see parking use the cameras and honor the lines.

D/L 17.7.2 last night. Bypassed 17.5.36 for some reason. But when I drove it AS35 showed up. Was able to test that extensively. Sometimes it veers left or right when there are line breaks, sometimes not. It's learning. It tried to go into right turn lanes as few times but sometimes not. It was very stable between the lines at first but then on a second try, it got a little wild but calmed down (more learning). It couldn't do lane change using the directional signal.
Then, some more testing. I live in Leisure Village, 55+ community. Our main street lanes are double wide but marked as one lane, double yellow down the middle. So AS can't see both sides. But it still works (TACC already works - speed limit 25 in the Village). First I tried the right side. It rode the line too much, sometimes right wheel on the line. Bicyclists (and wheelchairs) would not be safe.
Then I tried the double yellow side. Rode on or right next to it at first, but then it seemed to learn and stayed a few inches off. An improvement but not safe, especially when there were line breaks. All in all, promising. The very few that saw me 'testing' probably thought I was drunk or older than them.
I couldn't get parallel parking to work. I found a place but the space must have been too long (length and a half) to be recognized. I did park manually. Maybe it learned. Later I'll search for more opportunities.
Last edited: Feb 24, 2017
J

johnkelner said:
not really a useful update... : (
Click to expand...

It is useful for those of us that didn't have AS enabled for local roads yet. Only a few people got 17.5.36, so for most of us this is the update that enabled local road AS. It works great too as long as you use it where it is supposed to be used (only where there are clearly visible lane markings on both sides).
S

Works well on straight roads. It has serious limitations on curves and be aware of worn out lines. It's fun to play around with but must be constantly watched.
Reactions: vrykolas
J

OK, I think my parallel parking doesn't like me. Once I get the "P" to show up and double tap the shift lever, the main display tells me to get out of the car and it will park itself. Except that I want to stay IN the car while it does this (dangerous to exit the car in the righthand travel lane before it is parked.)

I'm guessing that there's more than a little 'user error' here, but I can't find out how to initiate parallel parking from within the car and then remain in the car while it parks -- any suggestions?
C

Double-tapping the shift lever is the wrong thing to do — that activates Summon (the feature that moves your car in a straight line after you get out). Auto parallel park is activated by shifting into reverse after seeing the "P" icon.
Reactions: brkaus and wesley888

Getting my Model X into a parking space

Tesla for Sale Mar 23, 2021
acevolt
A
L
Download erased ALL settings & data. Anyone else?