My X developed a very loud creaking/squeaking in the front from the suspension a few months ago. I didn’t know what the issue was and I was super busy and didn’t have time to deal with it so I took it to Tesla and they said the upper control arm in the front on pass side was bad and needed replaced. So they replaced it and $1,000 later there was no more squeak.
A few months goes by and then all of a sudden I get the same noise again but this time coming from drivers side. Now I’m getting pissed off because a vehicle that costs north of 100K shouldn’t have issues like this just out of warranty. I’m a pretty handy guy so I decided to jump in and take a look at it. I jacked up the vehicle and took off the front tire. I put a second jack just under the lower control arm to take the pressure off the suspension and I removed the bolt that connects the upper control arm (see attached). It’s a 15mm nut with a torx on the opposite side. With the bolt out I used the jack to lower the suspension about 1” and then used a small pry bar to pop out the upper control arm from the socket. I noticed the ball joint was stiff. I clamped on a pair of vice grips onto the stud of the ball joint and proceeded to rotate the ball joint around and around and side to side and front to back to move all the grease around inside the socket of the ball joint. I moved it around for about 2 minutes until it didn’t feel as tight because of the lubrication. I then jacked up the suspension the 1” I had lowered it and then pulled down the upper control arm to drop the ball joint stud back down into the hole. I had to use a large pair of pliers to sort of clamp it together to get it to go in. I prob could have done it by hand but pliers made it easier. I reinstalled the bolt that I removed and put the tire back on. Voila, no more squeak. The suspension is completely quiet.
The issue is the grease inside the ball joint doesn’t get moved around inside the socket enough and causes a squeaking over time. This took me all of 15 minutes start to finish to complete. That’s the easiest $1,000 I ever saved.
If you are a mechanical person it’s a quick and easy fix.
Wish I had of done this when my first one was noisy and would have saved a thousand bucks. Lesson learned.
See attached picture of the only bolt that needs to be removed. Except the wheel nuts of course.
I hope this info is able to help someone else.

You shouldn't have been charged anything. This has been a known defect for nearly a year. The SC manager first insisted that I pay nearly $2k for both control arms, but when I pulled up the endless threads about it, they covered it.
Reactions: glusc2002 and KentuckyX 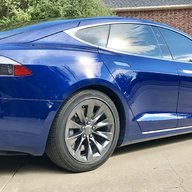 I’m happy to see posts like this. I love my car, but warranty is over now for me. But I’m a decent Mechanic and enjoy doing things myself. Even tho some of the particulars to being an EV are a mystery it’s still just a car in many ways and I will be able to fix a lot of it.
T

I took my Model X in for the steering bolt recall and it came back with a squeak like the one you're describing. Never had any issue prior to this service visit. Does it make sense for the two to be related? I'm green when it comes to anything mechanical with the car. 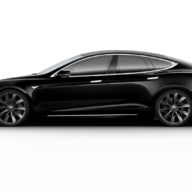 I just got this fixed at my SC. I noticed very noticeable loud creaking from the font whenever I applied the brake and more weight shifted to the front. I took it in and SC repaired it for free. Im not exactly sure what they fixed but its stated on the invoice as "Front and Rear Drive Unit - Lubricate at Hub". Either lubrication was added or taken off according to your original DIY fix.
T

glusc2002 said:
I just got this fixed at my SC. I noticed very noticeable loud creaking from the font whenever I applied the brake and more weight shifted to the front. I took it in and SC repaired it for free. Im not exactly sure what they fixed but its stated on the invoice as "Front and Rear Drive Unit - Lubricate at Hub". Either lubrication was added or taken off according to your original DIY fix.
Click to expand...

I am having same problem with my X. SC states it squeaks due to bushing noise, but no damage to control arm and no wear on bushing, so not covered under warranty, but I can replace control arm for $600. Does anyone have receipt of your warranty repair so I can show my SC, thanks
R

Here you go. One page from a service on my 2017 Model X a year ago where they replaced left and right upper arm assemblies under warranty for the same noise.

5thgear said:
You shouldn't have been charged anything. This has been a known defect for nearly a year. The SC manager first insisted that I pay nearly $2k for both control arms, but when I pulled up the endless threads about it, they covered it.
Click to expand...

I had suspension noise/rumble at low speeds over bumps. First Tesla replaced the control arm $800, but this didn't fix the problem. Tesla said, oh, that was so loose it was a safety issue. Then then replaced LH and RH aft lower suspension links. They said this fixed the problem, maybe, but that was another $1200. At the same time, they said the sway bar was loose and replaced RH sway bar link as goodwill. Who knows. I have since emailed the manager with a reference to these threads...

Does anybody have a video/audio recording of the sound? My 2018 MX started making this sound a few weeks ago. I have a SC appointment, but curious. My car *does* have the infamous "shudder" but I don't drive it hard at all. I made a video shows me just driving slowly with all kinds of squeaking and squawking. Seems to be coming from passenger side, at startup and gentle acceleration. Mostly heard on bumpy roads and while turning. Will try to post it to YouTube so I can share it here.
Last edited: Tuesday at 2:36 PM
J

That’s what mine sounded like before I did the DIY fix I note above.
P

That’s great news, thanks. It definitely sounds like rubber on metal, not metal on metal. I was worried I shouldn't be driving it around (SC appt isn't for a couple weeks due to other stuff). I assume my 2018 / 44K is still under warranty. I'll see what SC says but would be glad to try it out myself per your instructions should they try to charge me $1K. Thanks again for your help!
P

Update: I sent the video above to SC and they concur it’s the upper control arms (I assume the upper ball joint can’t be removed from the control arm so I get both). They’re also, happily, going to replace the drivers side as well - both under warranty. Hooray! Thanks again.

My M3 sounds like an old Citroen 2CV (suspension noise)

B
Creaking... not upper arm control