I love this to bits.
I've been advocating dual battery chemistry setups for performance and economy gains for a while. Until a chemistry hits the market that gets bot great density and really high charge rate (for regenerative braking), it's the way to go.

80-90% of the battery mass could be in a high density chemistry that offers decent power output, the rest is a high power battery with just a few kWh.

The small power unit takes care of regenerative braking (hundreds of kW extra for a number of seconds), and fast acceleration out of course to reach cruise speed.
The bigger "slow" range battery maintains cruise speed (I suppose 200kW suffices to make that car go 180mph/290kph), and funnels some energy to the fast one to be all ready for the out-of-corner sprint.

Next season, Formula E will do a whole race on one charge. Imagine adding a bit of body work for lower drag, actual wide slick tires, and a small power cell battery. It's very doable and frankly by now it should have its own race class. Set a minimum and maximum weight, crash test requirements, freedom to mix chemistries, and go crazy!
Last edited: Jun 15, 2017
Reactions: Yip M
•••
Y

Yeah, this is super awesome. Perfect for the 'Garage 56' program. It would be great to see an all electric class in a couple of years to lure Audi back to Le Mans (hopefully they'd do both Formula E and the WEC). It's amazing what the LMP1 teams have done with the hybrid tech already, only a matter of time before they're all electric!
Reactions: Cloxxki
•••

LMP-E, anyone?
Yeah the LMP1 cars really don't have a lot of ICE power, but they shoot out of corners just fine.

I wonder how far BEV performance could be taken in the LeMans tradition. I mean, similar style body and tires as seen in the GT and prototype classes. If we consider the outright pace of the NextEV Nio EP9 hypercar around the Nurburgring, it's not just grunt in a straight line. Could that car be converted for snappy battery swaps, and how long would it last out of the track with an optimized average speed over a stint plus pit stop? On proper slick tires?
That car is not conserving ANY electrons to achieve such a 20.8km lap, and may not evven manage a second at that pace due to "only" 80-90kWh of capacity. Swapping batteries even every 15 minutes, going through that long pit lane at super slow restricted speed for a lengthy pit stop...may not be the best way to go about LeMans. It might need to tone it down, a little. Less drag, sacrificing downforce, and lower average power output to optimize range + pit stop average. Still, I think it would be quite quick. With little over 300kW peak output (rather than a MW or so), it should stay with the faster GT cars as-is. Throw in some coast and regen, and it could hang on for a while, though still shorter than a GT car on a full tank I suppose.

LeMans has a quite fast track. The LMP1 hybrids lap it quicker than F1 does it's entire calendar except maybe Monza. And of course, realistically, F1 is 5-10% quicker around most tracks.
Such a quick track tends to benefit a slick design, certainly in a BEV, and Panoz seems to have reallly embraced that with an intriguing asymmetrical design.

Would the long straights and high average speed favor a bigger battery? I think it might, with pit stops so costly. So an optimal BEV for LeMans may be on the portly side. Maybe 100KWh from the lightest cells and packaging imaginable, and then a 2-5kWh "fast" pack on top to handle the extra regen and peak acceleration, keep that heat and strain away from main pack. Could be one huge pack that comes out from under the car in any way, or 2 units each side between the wheels so the car can even rest on its own wheels during a swap. The GT Pro cars weigh 1245 kg minimum, let's say 1300kg on average during a stint. An LMP-E might come somewhat close to that at today's tech level, with a near-100kWh total capacity and AWD.
I'd love to geek out finding the optimum power output througout the lap for a car that COULD do well over 300kW constant, but gets better placement with a bit less. Having so much performance on tap might be interesting in tactical situations. A forced last-minute pit stop for instance, or an unexpectedly early in lap. Might stay with the LMP2's in quali mode, while battling the best GT's over a race.
Reactions: Snerruc
•••

I hate it when I make a typo and there is limited editing.
Can a mod make it Panoz in the title please?
••• 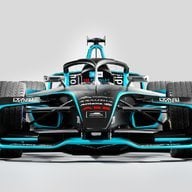 I'm hoping that this (or some other pure EV) gets the Garage 56 invitation from the ACO. I'm guessing there must be some kind of committee responsible for making the selection? The GT-EV might freak them out a bit because of the battery swapping and will probably require some new regulations for pit stops. Those new regs could be beneficial to other motor sports that may also start fielding EVs w/ battery swapping. Gotta start somewhere.
•••

The battery swaps would be a great opportunity for a large manufacturer to sponser a spec series. Everyone gett he same batteries (as in Formula E), the rest you can figure out for yourself, within some guidelines.
•••

The future of motorsport: the battery-swapping, all-electric GT-EV racecar built for Le Mans
•••

Cloxxki said:
I hate it when I make a typo and there is limited editing.
Can a mod make it Panoz in the title please?
Click to expand...

You need to use the "Report" function associated with your post to make that request. The mods do not have the time to read every one of the hundreds and hundreds of posts every day on TMC
Reactions: Cloxxki
•••