Who pays for supercharger construction?

Hey guys, I live in an area that is generally shy of EVs. I’ve been passively educating folks as they are curious about the car, telling them the benefits and pitfalls of a Tesla as a ICE replacement in this area.

One thing that rubs people out here the wrong way, is spending other people’s money. There’s a impression that EVs are expensive and are subsidized with tax dollars. The fact the oil companies may or may not get tax breaks are lost on them, two wrongs don’t make a right.

The things that really open folks out here up to Tesla is:

American made, by an American company.
Speed!
They think you have to charge it at a public charger, they surprised when I point at a 120v outlet and say, “there’s my “gas” station.”
Auto pilot is great on these long straight roads!

When I say the only bad thing about having an EV out here is the lack of DCFC on these long 80mph stretches of roads, and say I wish there were a few more options. Some immediately think that public chargers are funded with tax dollars, and that’s why there’s resistance to expanding EV infrastructure, then they say “just plug into a 120v outlet” ....haha, damnit!

With some rare exceptions, Tesla pays 100% for all the hardware, the construction, and the maintenance and operations (including electricity) of the actual superchargers. Their standard lease has the host businesses remaining responsible for common area maintenance, though--things like trash pick-up/sweeping, snow clearing, etc. Tesla trys very hard to find appropriate hosting businesses that are willing to lease them the needed space in their parking lot on a "value provided" basis (increased traffic/sales due to a captured audience with higher than average net worth) instead of for direct monetary compensation. So, whether or not they are actually paying tangible rent depends on the negotiations with the host property/business, but for Tesla to cave on the matter they have to feel like they really need the location and can't find an acceptable alternative without rent.

Superchargers use the Tesla connector which is proprietary and means only Teslas can charge from them. As a result, Tesla generally isn't qualified to receive any public funding for supercharger builds because they don't use an open charging standard. It's pretty rare for public grants for charging stations to allow that. So, even in areas where money is available for building DCFC, Tesla is almost never getting any.

Source: I've read a handful (5 or 6) of the leasing agreements.
Reactions: Country Roads, Rocky_H, Hydrocarbon302 and 1 other person
R

And this is the story of the development of the company and its growing success. When Tesla was starting out trying to get this working, there really wasn't any support from most of the public for fast charging stations, so there was not going to be any publicly funded infrastructure. So rather than waiting for the stalemate of the chicken or the egg going first, Tesla decided they would have to provide both the chicken AND the egg. They built out the network of the fast charging stations as the incentive that made their cars more attractive to buy. So they had to solve that problem from both ends.
Reactions: chronoreverse and Hydrocarbon302 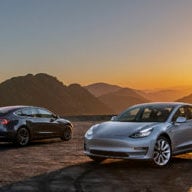 Tesla pays for the supercharger, but someone else may have to pay for the parking spot. I had my work approve 10 urban chargers which our company would pay for everyone's charging 24/7 too, but since we don't own the lot so the landlord wanted us to pay $200 per spot per month. We walked away from the deal because it's not fair that Tesla is paying for the bill and we pay for everyone's electricity, but the landlord won't chip in. It cost nothing out of pocket for him. Lot is never over 70% full.

Just pay the road user tax and then shut this excuse down.