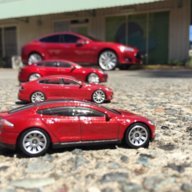 To celebrate the opening of the Gundagai Supercharger, Tesla is organizing the Australian Supercharger Rally. 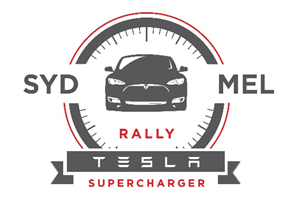 MangroveMike said:
To celebrate the opening of the Gundagai Supercharger, Tesla is organizing the Australian Supercharger Rally.

Who is going? And are you going the whole way?
Click to expand...

i will be going Sydney to Gundaghai...am told, start Sydney Tesla showroom 10am... Opening ceremony at Gundaghai 4pm.

ZTrekus said:
i will be going Sydney to Gundaghai...am told, start Sydney Tesla showroom 10am... Opening ceremony at Gundaghai 4pm.

Same sentiments for me. I'll be starting from Newcastle but don't really have the time for a two day adventure.
•••
Z

MangroveMike said:
Same sentiments for me. I'll be starting from Newcastle but don't really have the time for a two day adventure.
Click to expand...

Actually this is the first real long drive I will be doing in the Tesla since I got it. I mean when we got it we drove from Sydney to Wollongong (100km) and back, and then shortly thereafter, to Warragamba Dam (87km) and back - but that's about it.

So I am really looking forward to it - and especially in giving the autopilot a real test drive on the highways/freeways.
••• 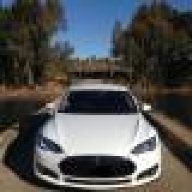 Great, I'm starting from Sydney too. See you there, MangroveMike and Ztrekus!
•••
Z

Kayto said:
Great, I'm starting from Sydney too. See you there, MangroveMike and Ztrekus!
Click to expand...

Looking forward to meeting you Kayto! Are you going all the way?

I seriously think DBORN should be doing this...
•••

Yeah. I was want to but the other half says nope, she has other stuff planned. AFTER I registered!!
•••
M

I'm going Mel-Syd. Looking forward to some serious time in the saddle.

Supercharger congestion is going to be 'interesting'.

With everyone being in Gundegai, I wonder how many cars will be there wanting to charge at the same time?

Mike, it will be good to meet you! I'm driving to Gundagai then peeling off due to a prior commitment. I'm going to hand the baton (so to speak) to a Melbourne owner who's driving back to Melbourne.
I don't think we need to worry about congestion. It's possible to drive between the Goulburn and Wodonga Superchargers on a charge (S85) before Gundagai opened. If everyone needs to use it at once, I'm happy to wait or skip it.
By the way, it will be a warm day! Tops of 35 degrees are forecast along the route for Wednesday. 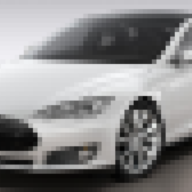 Hi Gents, I'm going accompanied by my better half. Looking forward to meeting you all. I'm on some leave at the moment so we are going all the way, but staying tomorrow night in Albury due to the late start. On Thursday we are going to go on to Torquey, and drive part of the Great Ocean Road which neither of us has done before. See you all tomorrow.:smile:
•••
C

I would love to be joining you all... unfortunately for work I have been traveling the past four... so trying to get a few days off work is near impossible. Perhaps next time.

I am taking my car to Sand Down this weekend as a compromise. 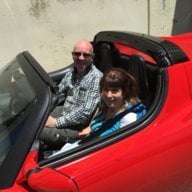 Are you guys traveling down from Sydney meeting at Tesla Richmond at all? I could pop into town and meet up with everyone.
•••

Good luck everyone. I will have to live your adventures vicariously as work makes it impossible for me.
••• 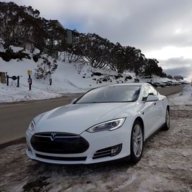 Keiron said:
Are you guys traveling down from Sydney meeting at Tesla Richmond at all? I could pop into town and meet up with everyone.
Click to expand...

Timpoo and I had a similar thought but it seems they're arriving about midnight!
•••

Latest Instagram from Evan at about noon looks like between the Southern Highlands and Goulburn.
https://www.instagram.com/p/-fQOghojRe/
•••
Z

My boy Thomas and I went from Sydney to Gundagai. We stayed the night there and then came back to Sydney.

It was my first long drive in the Tesla and so my first taste of the Superchargers.

I think the Rally was a great success. As always the Tesla drivers are so happy, eager to meet others and love their car. I was happy to be one of them.

By far my greatest surprise was how excellent, useful and wonderful the autopilot is on a good, divided long road at 110kmh. My only experience previously with the autopilot was only a few kms here and there on the M2, harbour bridge/tunnel and the Eastern Distributor. I realise now how foolish that was. I was really so astonished. When I got on the freeway from Sydney to Goulburn, I activated the autopilot - and I could have spent the rest of that section of highway in the backseat. The car just drove itself. It is so amazing. I was just a supervisor, not a driver. I got to see way more of the scenery and arrived so relaxed and so mentally un-exhausted! Even looked at the colours of the cows! My family is having a holiday in January to Canberra - and I can't wait to show the family what the autopilot is like.

Ditto from Goulburn to Gundagai. The only time I took control was when workers were on the road who had put out witches hats. Of course autopilot wasn't designed for that, especially since the workers direct cars across lanes etc...

Before finishing with the autopilot experience, I should add just a few more things:

We drove through at least 2 speed traps - hidden cop cars monitoring the flow of traffic. On both occasions, I had the car on autopilot and was doing exactly the speed limit.

Now for all the pedants and law enforcers out there, I should now say that all the inferences below that we exceeded the speed limit at any stage is just a wild exaggeration to make a point!!

So as you cruise in autopilot up behind the back of a truck, you see that your speed starts to fall off a few kmh (because of the truck)... So you hit the right blinker... the car speeds up and changes automatically - so beautifully, into the right lane. Then instead of just passing the truck at your cruising speed, the Tesla has such acceleration even at such high speeds. The car stays in autopilot even when you start accelerating!! And so when you have passed the convoy of relatively slow coaches, you then hit the left blinker and the car changes back into the left lane automatically and then slows itself down to the speed at which it is set to (when you release the accelerator). All done flawlessly and wonderfully.

I must say the job of a supervisor is so very different to the job of a driver. And hour after hour, 100kms after 100kms the autopilot just effortlessly seeks out the lane markings like a bloodhound sniffing out a scent. I so thoroughly recommend the experience!

The Superchargers are unbelievable too. When we arrived at Gundagai, there was a bit of queuing going on since there were only six bays and the Melbourne crowd were meeting the Sydney crowd. I waited a while (in fact we arrived late since we were in the second phase of charging at Goulburn and Thomas and I went for a walk there too). Eventually I pulled into a bay at Gundagai and the car needed about 60mins to charge up. But after about 30 mins I vacated the spot to allow for another driver who was leaving for Sydney that evening to use it since he seemed to be in a rush. So Thomas and I headed on to our hotel in Gundagai which was about 10kms away (remember the Dog sits on the tukerbox 5 miles from that suburb - where the supercharges now are).

I plugged the car into the 10amp powerpoint and it said I had about 11 hours of charging to go. Of course that would have got us through the night, but several hours later, Thomas and I decided to drive back to the dog on the tukerbox for dinner. And so 11hours at 10amps turned into about 20mins supercharging. Unbelievable. 10kms back to the motel and that 10km stretch required about 2hours of charging at 10amps. See the difference!

This morning we drove straight to Goulburn. We had all the bays to ourselves. But when we pulled in, a Tesla driven by Susan turned up and introduced herself to us saying she had just used one and came back to say hello. She was your typical happy sociable personable Tesla driver. She had done the rally form Melbourne and had made it as far as Goulburn where she stayed the night. She only had a 60kwh and didn't seem to have any problems at all. I asked her where a good cafe was in Goulburn and she pointed out the Rose Cafe. So Thomas and I went there for some bacon and eggs (yes I know cancerous and all - not to mention fatty! But all that autopilot supervision really takes it out of you you know!!)

First thing I did in Sydney was get a car wash (had to wash all the bugs off). Also peeled the Supercharger Rally stickers off the side of the car.

It was a really successful Rally and I just can't wait to take the family to the Gold Coast from Sydney on the next Rally - perhaps this time next year.

Here is a photo of Thomas with Heath Walker at the Sydney Tesla starting point: 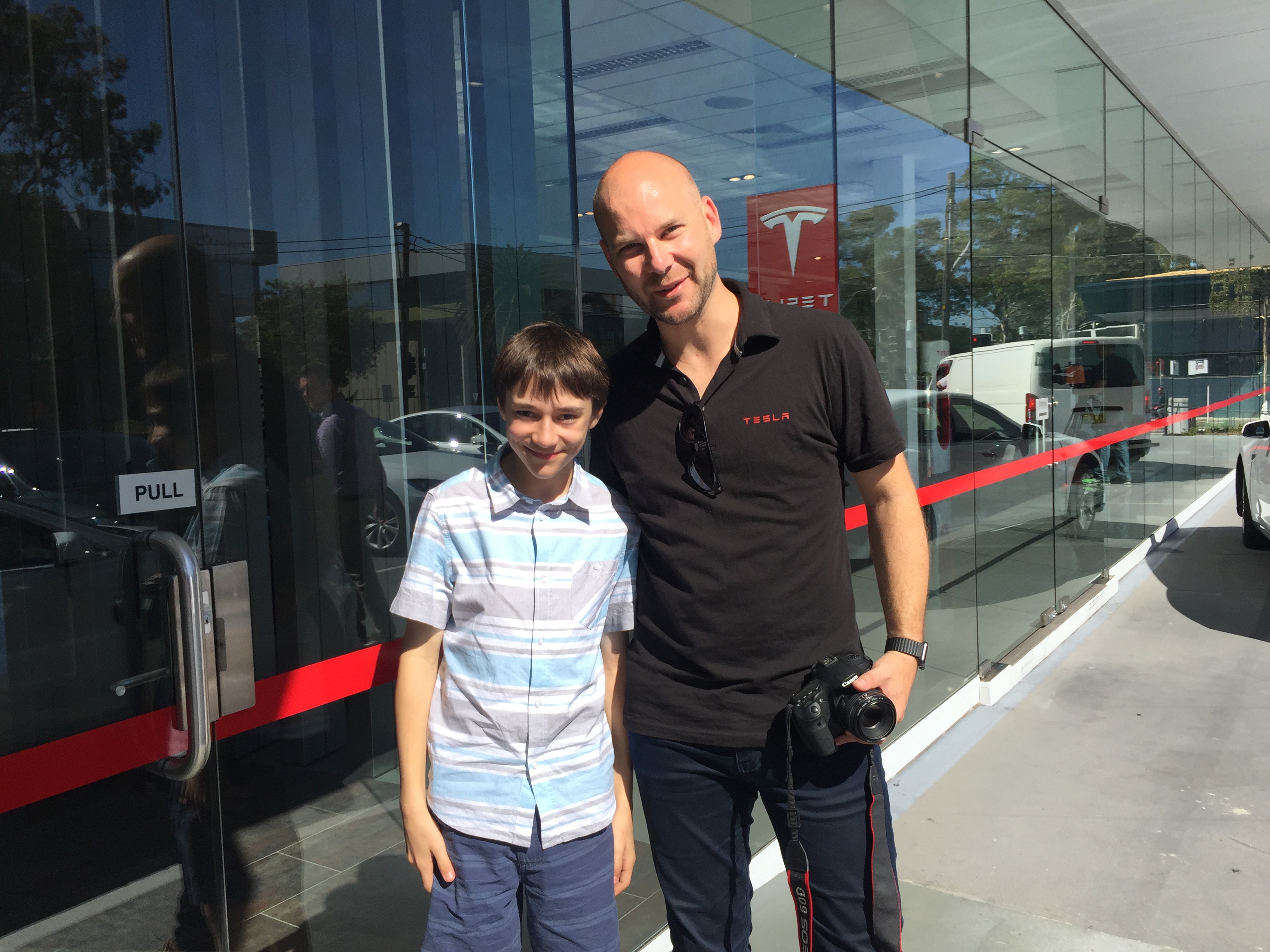 Great story ZTrekus. It was a great day and I agree completely about the Auto Pilot. It is a wonderful thing! I did over 1000kms yesterday and arrived home tired due to the late hour but not the driving. Absolutely brilliant.

It was also great to meet up with other Tesla owners.
•••
Z

MangroveMike said:
Great story ZTrekus. It was a great day and I agree completely about the Auto Pilot. It is a wonderful thing! I did over 1000kms yesterday and arrived home tired due to the late hour but not the driving. Absolutely brilliant.

It was also great to meet up with other Tesla owners.
Click to expand...

Hi MangroveMike - yes I saw you in Sydney - recognised that famous number plate of yours. Never got an opportunity to get around to speak to you there before we were all shuffling off to our cars. See you at the next Rally!
•••

ZTrekus said:
Hi MangroveMike - yes I saw you in Sydney - recognised that famous number plate of yours. Never got an opportunity to get around to speak to you there before we were all shuffling off to our cars. See you at the next Rally!
Click to expand...

There was a fair bit going on. Lots of fun.

Absolutely see you at the next one!
•••