I started talking to a company about solar panels on the house and they have put together a proposal (I haven't seen yet -- meeting is set for tomorrow) that includes an EV charger with the inverter.

Some basic info for the inverter's charger (more details in the link above):
I had initially planned on doing a NEMA 14-50 self install (I've done some panel work before -- not terrified by the work).

I understand the 3 is limited on its ability to charge without a HPWC, but my reading seems to bring up conflicting info about the specific limitation.

Considering that I can install the NEMA 14-50 myself for the cost of the parts (~$50 based on my rough estimate), I'm thinking I should ask how much getting that charger with the inverter adds to the cost of the solar install.

My Questions:
Would this J1772 charger charge the Model 3 at the same rate as the NEMA 14-50?
Any other reasons I should consider one over the other?
••• 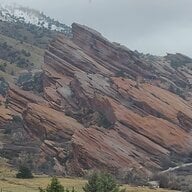 If you get the HPWC (installed on a 60 amp or higher breaker) and the LR Model 3, you could charge the car at 48 amps.
If you use the Mobile Connector that comes with the car, you'll be limited to charging at 32 amps on the 14-50 outlet.
If you use buy a 1st Gen Mobile Connector, you'd be able to charge the car at 40 amps on the 14-50 outlet. This would cost about the same as the HWPC. Since you can do the install yourself, the HPWC would probably be a better choice than the 1st Gen Mobile Connector.
If you use the J1772 plug and the J1772 adapter that comes the Model 3, it looks it could actually allow you to charge at 40 amps (instead of 32 amps), if I'm reading the data sheet for the SE7600H-US correctly.

The J1772 plug would require you to use the adapter when charging Teslas but you wouldn't need any adapter if you had a non-Tesla EV in the future. Using the MC or HPWC would allow you to push a button to open the charge port vs. having to open it manually. It looks like the J1772 charging inverter does have a longer warranty and energy tracking features not available with the current HPWC or MC.
Last edited: Apr 24, 2018
Reactions: dhrivnak, GSP and Asad1087
•••

I have a large solar system using micro converters. Put in the nema 14-50 plug near panel. I get about 38mph at 40 amps
Faster than our x which gets 28-30 mph range. I just use plug that came with x to charge both cars.
•••

Thanks, This is excellent information!
•••

The inverter-attached EVSE sounds interesting, but I don't see a compelling benefit. Cost is likely to be higher. Charge rates should be the same for a given amperage at 240V.

I'd also think about where to put the inverter and how that affects the location of the attached EVSE. I'd think you'd have more flexibility with the location of a NEMA 14-50 or standalone EVSE.
••• 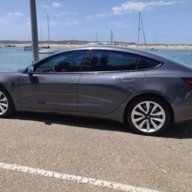 The solar edge charger has a 12 year warranty. Sounds compelling but I would imagine the price is high compared to a typical charger.
•••

Does the inverter-attached EVSE mean that you can charge the car during a power outage, strictly from the solar panels? If so, that could be interesting if you live in an area with frequent or longer-lasting outages.
•••

gregd said:
Does the inverter-attached EVSE mean that you can charge the car during a power outage, strictly from the solar panels? If so, that could be interesting if you live in an area with frequent or longer-lasting outages.
Click to expand...

Not without a battery, I think. The pdf mentions "Automatic rapid shutdown upon AC grid disconnect"
•••

mblakele said:
Not without a battery, I think. The pdf mentions "Automatic rapid shutdown upon AC grid disconnect"
Click to expand...

Ok, that sounds right, but it is probably only referring disconnecting to the feed to the house and external grid, as is required by code. I wonder if the EVSE might be a separate circuit (never feeding to the grid), so may be alive even during an outage. Or, I could be imagining this.
•••

The product page and the product brochure mentioned earlier don't mention that it would charge only from PV. If it would, it is missed marketing opportunity.

I will ask the solar installers today since we have a meeting scheduled.
•••

My system is a grid tie system. Grid goes down , my system shuts off.
•••

No EV charging if the grid is down. The cost of adding the EVSE wasn't much in the scheme of things, so I went with it. I have a bunch of work in the garage to do to get ready for the car, so it's worth not having to deal with installing the NEMA 14-50 myself. Now I am getting much cheaper charging on the car and two big tax credits this year.

Now the question is which I will receive first. Solar panels complete 14 days after HOA approval. Model 3 is ??? Waiting on a VIN right now (ordered black w/ aeros on 3/30).
Reactions: dhrivnak and GSP
•••

If it were in San Diego, you would definitely get your 3 way before permission to generate from sdge. (The biggest rip off utility in the USA)
•••

Update -- The total price of the EVSE added to the solar panel inverter was going to be more than a Tesla HPWC. It didn't take much convincing to have them to purchase the HPWC and roll that up into the solar loan so that it is covered by the solar federal tax credit.
•••

Did you read the first sentence of the brochure ?

Increase your revenue by offering homeowners a SolarEdge single phase inverter with an integrated EV charger.
Click to expand...

I am **really** happy with my SolarEdge system, but the EVSE angle is not attractive.
•••

SageBrush said:
Did you read the first sentence of the brochure ?


I am **really** happy with my SolarEdge system, but the EVSE angle is not attractive.
Click to expand...

I did see that and I agree. I guess they wrote the brochure expecting their audience to be resellers and installers rather than end customers. My Solar installer is also pretty enthusiastic about SolarEdge, and I'll still be getting their inverter, but not their EVSE.

I'm very excited to see it all working. I tried to get solar in Charleston, SC before, but the HOA told us we could only put solar on the rear of the house which was north facing. I don't think I've ever felt as out of control of my own property before -- it royally pissed me off. My wife and I wrote a bunch of letters to various people (city, county, and state leadership). Nothing mattered so I left that backwards state.
Reactions: Runnergirl and SageBrush
•••

mwu said:
about SolarEdge, and I'll still be getting their inverter, but not their EVSE.
Click to expand...

It is hard to beat the price and versatility of a couple 14-50 plugs, particularly if you can self-install.

The only compelling reason to use the integrated inverter and EVSE is if you don't have enough main panel capacity to add them separately. Since one is a load and one is a supply, they can both run full blast and not overload the circuit.
Reactions: SageBrush
••• 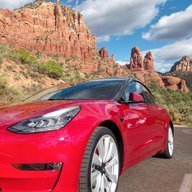 Sandiegodoug said:
I have a large solar system using micro converters. Put in the nema 14-50 plug near panel. I get about 38mph at 40 amps
Faster than our x which gets 28-30 mph range. I just use plug that came with x to charge both cars.
Click to expand...

Hi, Sandiegodoug; I am installing a 10.8kw solar panel system, and was wanting to self-install a nema 14-50 on my PV inverter’s output. It seems straight forward. But would grid electricity (non-solar panel generated electricity) back flow to the nema 14-50? Do you use grid-provided electricity at a different plug for charging when the sun isn’t out? I ask because I am working on installing my own 30 panel 10.8kw system here in Scottsdale, AZ. Any help is appreciated! -Jay
•••
D

mblakele said:
The inverter-attached EVSE sounds interesting, but I don't see a compelling benefit. Cost is likely to be higher. Charge rates should be the same for a given amperage at 240V.